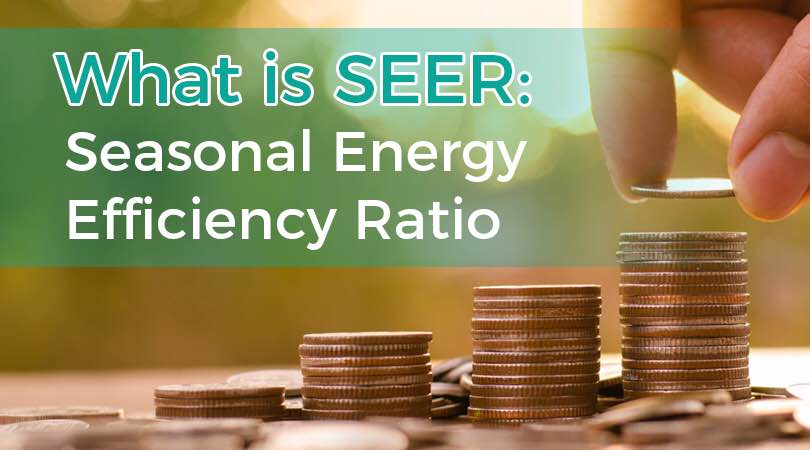 One of the largest factors that go into the purchase of an air conditioning unit is the cost. Although the upfront investment is easily compared, the energy expense also needs to be investigated. The Seasonal Energy Efficiency Ratio (SEER) is one way of measuring that expense. This method was developed by engineers to determine the efficiency of a house’s cooling system. The SEER of an air conditioner will help determine the monthly utility bills a homeowner or business owner will pay for the duration of the HVAC unit’s life.

In simple terms, a higher SEER rating of an air conditioning system means it is more efficient at cooling a house over the course of a season. SEER measures the total cooling effect produced by the air conditioner or heat pump during a normal cooling or heating season compared to the total energy consumed by the device in that period of time. The SEER efficiency rating was designed while specifically keeping US temperatures in mind.

The Energy Efficiency Ratio of a cooling system tells you how efficiently the system will work once the outdoor temperature reaches a specific point. In technical terms, the EER is the rate of heat energy removal at a steady pace divided by energy consumed by the product when measured in watts.

The ENERGY STAR specification includes both the computed SEER and EER ratings of an HVAC system and helps indicate the efficiency of the product under separate conditions. While SEER is a more accurate reflection of the system’s efficiency during peak hours, the EER rating is a more general estimate of efficiency. Both ratings should be considered while choosing a particular cooling system.

Some clients believe that retaining existing units and keeping them well-maintained will save them more money than replacing the entire system with an upgraded model. However, this reasoning fails to take into account the fact that the efficiency of air conditioners always degrades over time, no matter how much money is spent on its maintenance.

How to Calculate SEER Ratings

When considering the SEER and EER rating of an HVAC unit, remember that while both are important measurements for finding a system’s efficiency, you must use the same rating while making a comparison.

If you use SEER to choose the more efficient system, you can save a lot of money that would otherwise be lost in the form of wasted electricity. This means that if you were to upgrade your cooling system from a SEER 9 level to a SEER 13 level the amount of power consumed by the system will reduce by close to 30%. A lot of money can be saved by a homeowner or company annually by choosing a cooling system with a SEER rating that matches their needs.

How To Improve Efficiency

Once you have evaluated the SEER rating of an HVAC unit, you must also understand that improving the efficiency of the cooling system depends on several other external factors other than manufacturing quality. Firstly, adequate indoor space must be allowed for the installation of the system.

An access door or duct must be provided in the furnace to regularly clean out the evaporator coil. There should be enough supply registers to allow fresh air into the house or building. The thermostat must be placed in a location that is a certain distance away from sources of heat, like windows or supply registers.

Ball Building Services is a licensed and bonded HVAC Contractor. We serve the Tampa Bay area and Central Florida with fast, reliable service. We can help you determine the best HVAC unit for your residential or business space needs, including one with a great SEER rating. Contact us today for an appointment.

Editor’s Note: This article was originally published on August 17, 2017, and has been updated for freshness, accuracy, and completeness.